Entrepreneurial Drive Cannot Be Taught But Everything Else Can Be

“We raised seed funding from Tech Coast Angels as the youngest team they have ever invested in and still managed to graduate college a semester early.”

I never thought I would be an entrepreneur.

Growing up, I didn’t operate a lemonade stand or lawn mowing business like the entrepreneurs who are “born with it.” My parents and I immigrated to America from the Ukraine and, like in most immigrant families, it was understood that I would get good grades to get into a good college to land a good, stable job.

But my life paradigm completely changed when I found myself in a community of Western entrepreneurs who were trying to build their lives and fortunes. They were passionate, tenacious, independent and a little bit crazy. They were in control of their destinies in a way I never knew was possible. That glimpse into their world was one of my most defining moments at USC. I declared a concentration in entrepreneurship. I had no clue what business I would start or how I would start it, but I knew I had to start somewhere.

I co-founded Planana with a fellow Trojan, Fei Xiao. We won a DEMOgod Award, were named one of the Coolest College Startups in America by Inc Magazine, raised seed funding from Tech Coast Angels as the youngest team they have ever invested in – and still managed to graduate college a semester early.

Here are some of the most important lessons I’ve learned as a young female entrepreneur:

#1 – Entrepreneurial drive cannot be taught but everything else can be.

There always seems to be a debate around whether entrepreneurship can be taught. From my experience in the Lloyd Greif Center for Entrepreneurial Studies, I definitely have to say that answer is yes. These courses provided me with a foundation in entrepreneurship that gave me the knowledge and inspiration to eschew a traditional career path.

However the mentality of an entrepreneur cannot be taught in a classroom. Most of the successful entrepreneurs I have met are insanely driven, have an insatiable desire to learn, build, improve and are incredibly resourceful. They thrive in uncertainty and won’t stop until they get what they want. Some are born this way; others develop these characteristics by living, making mistakes and getting dirty.

When you are young and relatively clueless, lots of people want to give you advice. They usually have the best intentions and want to spare you the grief they’ve already experienced.

Whether it is being smart about how you divide equity or being incredibly passionate about the problem you are trying to solve or other topics entrepreneurs like to blog about, there are some lessons you can only learn by making your own mistakes.

When Fei and I stumbled into startups a year ago, we didn’t know the difference between frontend and backend coding. We didn’t have money or real world experience. We just had a bunch of terrible ideas. I’ve learned that no one is certain of anything in startups, so when you’re young and naive, you have nothing to lose.

The moral of my story is just do it, just start something. 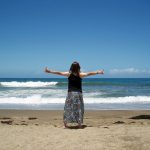 When You Lack Experience, Sometimes Simply Participating Is Enough To Get Started

How to Start a Business: Rinse and Repeat

There Has to Be a Better Way: My Path to Becoming an Entrepreneur
Judith Martinez