EatDrinkJobs is one of the 10 startups pitching onstage at PITCH NYC Conference & Competition – get your $300 conference pass to join Women 2.0 on November 14.

Everything I learned about entrepreneurship started with three words… “you have cancer.”

My sudden diagnosis turned each day into a gift and at a very young age, this harrowing journey taught me more than I ever expected to learn about life, true grit, and making things happen.

Here are the lessons I learned about entrepreneurship and life:

“Experts” and those who know more than you are not always right (a lot).

While making preparations for a trip to Europe, I noticed two lumps in my neck. I was not overly concerned, but went to the doctor and had tests done – they told me it was nothing to worry about. Two years later, I was diagnosed with Stage 4 Non-Hodgkin’s Lymphoma and was in a chemo chair three days later. I was 26 years old.

Failure, big and small, is a part of life and makes you stronger.

I failed my first bone marrow transplant (well, my body failed the transplant and that was no picnic). The cancer was in check for the moment, but my bone marrow never grew back. I received over 300 blood transfusions over two years to keep me alive. My long-term boyfriend called it quits and at points, I wanted to as well.

Lesson #3 – Be Able to Pick Yourself Up.

Being able to “dust yourself off” and try again is imperative to achieving great things. I had a wonderful, elegant, older social worker at my hospital that used to refer to an old Frank Sinatra song “Pick Yourself Up.”

“So take a deep breath Pick yourself up, dust yourself off
Start all over again”

This has stuck with me all these years later and has been my mantra.

Surround yourself with a great team, family, friends, mentors and advisers to give you the support you will need to build a business.

I was really resistant to joining a support group when I was first diagnosed. Halfway through after the first failed bone marrow transplant, I decided I needed one, and I signed up for the young person’s support group. It was a game changer. I was suddenly surrounded by a community of people who got what I was going through and was there for me.

Picture the end and figure out how you are going to get there.

I never thought I was going to die. I had a 15% chance of surviving my second bone marrow transplant, but I never thought I wasn’t going to make it, unlike my “top” cancer center in New York. I fired them and went to the other side of the country to a transplant center that was willing to give it a try. They saved my life.

Life is short, what have you got to lose? Try something, fail or succeed, try again. Repeat.

When someone has to face a really tough challenge, they often say, “Why me?” Unfortunately, almost every family faces cancer. I happened to be that one in my family. I like to turn that phrase on its head and think “Why not me?” Why not me who will survive, why not me who can run marathons, why not me who can go to cooking school, business school, travel the world, make it to be a finalist in a competition. Why not me?

I had a four-year-plus run in cancer world, and it changed everything for me. A lot of tough stuff, no doubt, but I managed to keep some funny around. I had a lot of great parties and managed to always be laughing during that time. Best medicine? Absolutely. Work hard, keep laughing, and keep feeling lucky to be able to do what you do.

Editor’s note: EatDrinkJobs is one of the 10 startups pitching onstage at PITCH NYC Conference & Competition on November 14 – get your $300 conference pass to join hundreds of men and women at Women 2.0’s inaugural conference and competition in NYC!

Women 2.0 readers: What keeps you going when the going gets tough? Let us know in the comments.

About the guest blogger: Julie Lerner is Founder of EatDrinkJobs. She was raised in the radio business outside Philadelphia and spent several years working for radio stations but decided she wanted to follow her own passion-food. She attended the French Culinary Institute in New York City and received certificates in French Cooking and Fundamentals of Wine. She holds a degree in Radio, TV and Film from Northwestern University and an MBA from Bordeaux Ecole de Management. 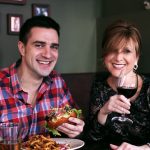