By inviting people to share their experiences and finish the sentence “I learned to program…”, it’s capturing and sharing the work of featured programmers, a third of whom are women.

The decision to overrepresent females (who are still the vast minority of computer science students and professionals) was a deliberate one, says creator Benjamin Chun, a CS teacher in San Francisco. He wants girls to feel that they have a place—and adult role models—in the field. The project ultimately highlights the diversity of the industry by providing a shareable space for people to reflect on their own introductions to coding. Visitors see one-sentence tales about the initial allure of programming, which range from empowerment to self-education and escape.

Chun’s response? “I learned to program by reading comments in an HTML file.”

"I learned to program in an Intro to CS class in high school. Thanks Mrs. Elia!" 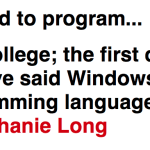 “I learned to program in an Intro to CS class in high school. Thanks Mrs. Elia!” 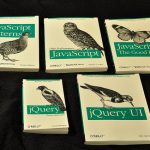 Resources For Learning Programming On Your Own