Growth Hacker – The New “In” Thing

This is an intersection of technical chops with marketing – as defined in Andrew Chen’s post.

There has been considerable debate off late of the Growth Hacker being the new VP of marketing, kicked off by this Andrew Chen blog post. It looks like it’s on it’s way to be the the next big thing after the “data scientist”.

Data Scientists took off a few years ago. The current state is that most companies, including a lot of startups, are hiring data scientists with little knowledge of what to do with them. I’ve had companies admitting they don’t know why they’re collecting the data but they are. Everyone is collecting data. Everyone wants someone to analyze data and everyone either has or wants a data scientist.

Now let’s come back to the Growth Hacker – this is an intersection of technical chops with marketing – as defined in Andrew Chen’s post. It’s the person that understands metrics, can send out email marketing campaigns and run A/B tests on a fly among other traditional marketing stuff.

Growth hackers will probably be one of the most in demand jobs in the next few years.

What’s interesting is not just the current growth hacker trend, but how computer science is intersecting with other fields to create new professions.

That’s what the next trend is post the growth hacker. Combine technical / programming skills with something else.

That’s the trend which is going up and will go up – the interdisciplinary applications of technical skills. The gap between computer science and other fields is decreasing, the power goes to people who can understand, combine and execute.

Technology is the medium and all skills are more valuable if we learn to communicate the technical language.

It’s all about doing it yourself.

This was originally posted at Unscientific Correlations.

About the guest writer: Romy Misra is the Director of Analytics at Visual.ly, the world’s largest community of infographics and data visualization. Prior to Visual.ly, she was a Senior Analyst at Pear Analytics. Romy holds a B.Tech in Mechanical Engineering from Harcourt Butler Technological Institute (HBTI) and a master’s in Industrial Engineering from Texas A&M University. Follow her on Twitter at @romymisra.

The Science Of Marketing 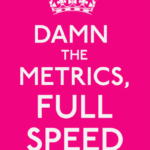 Damn The Metrics, Full Speed Ahead!

How to Ensure Your Marketing Campaign Is a Train Wreck

What Career in Technology Is Right for YOU?
Judith Martinez