What I Learned At Facebook's Girl Geek Dinner

Women at Facebook shared tips on everything from returning to work from a pregnancy leave, to integrating your career with your children’s lives.

Less than a week after Facebook’s IPO, a panel of women at Facebook were assembled to answer questions from the attendees of a Bay Area Girl Geek Dinner. The panel consisted of women in management positions, including Cipora Herman, Facebook Vice President of Investor Relations, and Jocelyn Goldfein, Facebook Director of Engineering.

In addition to career advice for technical and non-technical people interested in startups and technology companies, the panel discussed tactics for childrearing and balancing a career. Panelists shared tips on returning to work from a pregnancy leave, to integrating your career with your children’s lives.

One of the takeaways from the night (and many other Girl Geek Dinner speakers and panelists have said this as well) is that working women deserve to get nannies so you can continue working and do what you want to do. The women onstage shared stories and tips about coming back to work from a pregnancy, for example returning midweek from a pregnancy leave to give yourself a bit of a cushion with the coming weekend. Don’t start on a Monday.

Is timing everything? You can’t rush time… Everyone will create a unique arc or trajectory in life. As Sheryl Sandberg says today’s careers are jungle gyms. Your life will not go up and to the right in a straight line or trajectory. Remember it’s the journey that counts – keep learning, keep producing, keep shipping.

On getting promoted as a woman:

“It’s not like you’re buzzing along as a pure individual contributor one day and the next someone taps you on the shoulder with a septor and says, ‘Congratulations you are a manager now!’

As an individual contributor – as a technical individual – you have opportunities all the time to demonstrate leadership: by reviewing other people’s code, by helping someone who is new, by working on a team with 2-3 other people and showing the way, by having judgment that other people respect, by making decisions that are yours to make and if the decision isn’t yours to make (make a recommendation to the decision-maker).

All those things – if you just start doing them because you gravitate toward doing them, signals that you are going to be a good leader and you will probably make a much gradual transition from coordinating things around you. That is often what I see happen in technical organization. Just be a leader. Promotions follow. It is the nature of growing companies to generally grow from within.

Be in the right place at the right time where there are those opportunities opening up. That’s a matter somewhat of luck, but also gravitating toward companies that are growing.” – Jocelyn Goldfein (Director of Engineering, Facebook)

On getting hired at a company:

“Don’t read too much into people’s career websites. Facebook explicitly hires about 75% generalists in their software engineers. Often the reqs on our website look very specific. If you look at our engineering website, there are 50 reqs that look like specialists but it turns out 70% of people we are hiring are those other 1-2 [reqs]. I don’t think the reality is that companies want specialists, that’s just websites.

In terms of job hunting, applying to a company is probably the wrong way to find a job anyway. A huge proportion of the people that I have hired in my life have been through employee referrals and every job I found after college was found through my personal network as well. For you to know that company from the inside because you know people who are there is the best way to know they’re a great company. When you are entering that company thru a referral thru someone that knows you and knows the environment, they will do that matchmaking for you.

The half-life of technology is two years. If you learn a programming language or you learn a framework or you learn a system, you get to do that maybe 4 years before it’s obsolete. So if we look for people who know a certain skill, that’s worthless to us. What we need are people who are broad enough to learn what comes along next.” – Jocelyn Goldfein (Director of Engineering, Facebook)

Advice for non-technical women who want to work in a startup:

“A strengths-finder test helps clarify what you are good at and what you gravitate toward. It was fascinating and clarifying for me in between jobs. Just living in the Bay Area, there are a million different opportunities you can gravitate toward especially startups and you can do anything. I had to take a step back and say what do you value, what plays to yours strengths, what do you want to do.

Sit down and write on a piece of paper the three things you have to have in a job, non-negotiable. It will help you on your journey on what you are going to do. Make sure you are playing to your strenghths and recognize it because it plays into your performance and what you’re striving for.

Do something every day that scares you because that’s where you learn the most.” – Yvette Lui (Director of Global Marketing Solutions, Facebook)

How men can support women in tech:

“A Harvard Business School case study says women are overmentored and undersponsored. Women are having a fairly easy time finding mentors on average. But it turns out what propels your career more than coaching and advice is actually when an opportunity comes up, someone says ‘oh she would be good for that, why don’t we give that project for her?’ or ‘why dont we encourage her to interview for that?’.

So many opportunities and openings and positions happen in these informal ways – of senior people kicking names around. And sometimes we just don’t think of the women because there are fewer of them, or we have blinders on and our stereotypes for ‘director of engineering’ we think of a man, so we forget about the qualified woman there.

When we see opportunities to help or you see projects go by, remember the women. Sponsor women.” – Jocelyn Goldfein (Director of Engineering, Facebook)

As a woman, how do I get my name to get kicked around – to be noticed?

“Own your idea and stand up straight and have the confidence and go out and kick ass and don’t be afraid to tell people and say ‘hey did you see that?’ That is hard for everybody, but seems on average to be harder for women. What are the things we do to fade into the background? We don’t sit at the table. We hedge. I think it’s about doing great work and owning your great work.” – Jocelyn Goldfein (Director of Engineering, Facebook)

On following your authentic self to success:

“Find out what is meaningful to you and do it earlier – figure it out when you are 21 versus your 30s and it’s really important to you. Figure out what’s meaningful to you. Listen to your body, not your mind. Because my mind was telling me I should go into computer science, there aren’t enough women in computer science, I’m supposed to represent – that’s where all the power players area at these tech companies are (in product and engineering) so I should go do that (like Jocelyn).

Given the recent Anne-Marie Slaughter piece in The Atlantic, women are debating when to have children. As Cipora Herman (Treasurer & Vice President of Investor Relations, Facebook) said “I do think the milestones become more important to the kids later in life rather than at two – they’re a little bit more agnostic whether the nanny showed up.” Really, there is never a “right” time to have children – but you can judge when in your child’s life you would like to be more present. When does it count? Who will be present – a partner, family, nanny? This is not a linear path.

What I Learned At Facebook’s Girl Geek Dinner 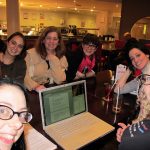