Why Have A Woman/Tech Blog?

I bring a different perspective as a female, and my ability to inject a refreshing dose of estrogen to an otherwise testosterone-heavy workplace is usually welcomed.

I’m a huge fan of the TV show Mad Men. What originally attracted me to it was its irreverence and how effectively it demonstrates what the workplace was like fifty years ago. Racism, sexism, smoking, more smoking and drinking while pregnant – all these practices are taboo today, and it’s really interesting to see where we started and how far we’ve come.

But I also enjoy it because at times I feel we’ve come a little bit too far. Too politically correct. A simple joke that may once have been welcomed with laughter is now met with stunned silence and fearful glances. Such was the case when I made a moderately risqué joke to a group of male colleagues at lunch one day. I was fairly new to New York City and the United States at the time and didn’t truly appreciate just how far towards political correctness America had come, compared to my native Australia.

A few months ago, when I was approached to write for a women/tech blog, I noticed one overarching theme as I studied its posts – Why aren’t there more women in tech?…How to attract more women to tech, etc. It seemed rather specific to me. I didn’t feel I could add anything particularly original beyond what was stated – but more importantly, I wasn’t sure I agreed with the rhetoric.

Personally, I’ve never felt disadvantaged as a woman in the IT industry. Quite the opposite. I’ve been able to bring to the table everything my male counterparts have, and more. I bring a different perspective as a female, and my ability to inject a refreshing dose of estrogen to an otherwise testosterone-heavy workplace is usually welcomed. If anything, being a woman in tech has worked in my favor, not against. Simply put, I don’t believe in making my gender an issue when it comes to my career and business.

So, when I was reading about people wanting to improve the participation of women in tech, I had a hard time connecting with this issue. I’ve never really felt doors were closed to me because of my gender. To my mind, many women are attracted to industries that have more of a focus on soft skills, and there is nothing wrong with that.

I recently returned to the U.S., this time to Silicon Valley, to take my internet business WotWentWrong to the next level. The fact that I’m a woman in the tech industry is not something at the forefront of my mind. I’m a person owning a business in the tech industry; being female is just one facet of who I am, and it doesn’t enter into my consciousness when doing business. Naturally, my expectations of how things would go in Silicon Valley didn’t factor my gender into the equation.

Only it hasn’t really been the non-issue I expected. Recently I presented at a pitch event for startups. During the evening’s networking portion, a fellow CEO introduced me to an angel investor he had just met. This angel investor’s first words after my introduction were, “Is this your wife?”

WHAT? Did we all just step back into the Mad Men era? On what planet does being a female at a startup pitch event relegate me to wife status? Surely we have come further than that in 2012? Or, does a 1960’s wormhole only hover over Silicon Valley? The next man I spoke with wasn’t much better: “Wow, CEO, you don’t get much higher than that.” I wonder if his words would have been
the same if he were talking to a male.

The thing is, I can deal with these comments. They certainly don’t deter me from pursuing my goals. And I’m not going to get all feminist on them and attack their prejudices, because we all have them, and the only way I can confound them is to be the best female CEO I can be.

But what concerns me is this could just be the tip of the iceberg. It’s the prejudices not immediately apparent to me that are much harder to tackle. I’m not alone in this concern. I recently met a fellow female CEO at a networking event. She expressed her dismay at experiencing more gender intolerance in Silicon Valley than in the male-dominated oil industry, where she had operated previously. Perhaps the Mad Men era time-warp does only hover over Silicon Valley?

I genuinely hope my experiences were the exception rather than the rule. I’ve encountered a lot of fantastic people – both men and women – who have been really helpful and believe in what I’m doing. I’m by no means on a male-bashing podium. But unfortunately, my recent experiences in Silicon Valley have brought me new appreciation for the refrain on the women/tech blog: how to encourage more women to enter our field. Ladies, I get it now.

Women 2.0 readers: How are you working to change the ratio or improve the Man Men era antics? Let us know in the comments.

About the guest blogger: Audrey Melnik is Founder and Developer of WotWentWrong, a new way for people to get advice about their dating lives – directly from their exes or via crowdsourced insights. Passionate about the intersection of internet technology and business, she developed and enhanced the online businesses for both corporate and government clients in the U.S. and Australia, including Pfizer, Yellow Pages and GE Money. Follow her on Twitter at @audreymelnik. 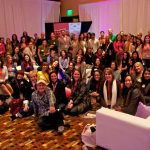 Gender In Tech: No Longer A Silent Issue