Meet The Co-Founder Of CloudFlare: Processing Billions Of Page Views Monthly (Women 2.0 Conference: "The Next Billion")

The upcoming Women 2.0 Conference on February 14 will be focused on “The Next Billion” – consumers, markets and products.

Meet Michelle Zatlyn, co-founder and Head of User Experience at CloudFlare, a startup that currently processes over 20 billion page views monthly. That’s more than Twitter, Amazon and Wikipedia combined. She will be speaking at the Women 2.0 Conference on February 14 in San Francisco about being a non-technical co-founder of a technical company and how she grew with the business to serve billions of page views monthly.

At CloudFlare, Michelle creates products people love. She grew up in Canada, where she earned a degree in Chemistry from McGill University. Now she now applies the scientific method to improving businesses like CloudFlare. Prior to CloudFlare, she worked at Google and Toshiba, launched two successful startups and got her MBA from Harvard Business School.

Get your ticket to join 800+ women and men on February 14 for Women 2.0’s biggest annual event in San Francisco – a full day of successful women entrepreneurs and executives speakers, as well as the presenting finalists from the 2013 Women 2.0 Startup Competition!

View the agenda and who’s coming to lunch on February 14 – see you there!

Women 2.0 readers: What metric in your business reaches the “billion” mark? Share in the comments below.

Meet The Co-Founder Of CloudFlare: Processing Billions Of Page Views Monthly (Women 2.0 Conference: “The Next Billion”)

How To Scale Your Company The Right Way: 6 Tips To Avoiding Growing Pains 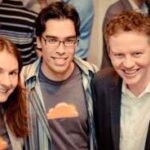