This Is What An Angel Investor Looks Like – Andrea Zurek

Women 2.0 profiles women angel investors in our weekly “This Is What An Angel Investor Looks Like” series.

Early Google employee Andrea Zurek has been an active angel investor since 2006. She is one of the founding partners of
XG Ventures, a small group of ex-Googlers dedicated to advising and investing in supremely talented early-stage teams. XG Ventures (stands for X-Google) focuses on startups in the consumer internet, mobile and online media sectors.

Andrea is currently on the advisory board of Astia and a friend of both Mozilla’s WebFWD open innovation program and Santa Clara University’s Leavey Business School.

How and why did you decide to become an angel investor?
“Working at Google in sales.”

What investments have you made?

Editor’s note: There are too many to list, so here are the female-founded ones.

Number of investments a year?
“15″

What types of industries do you invest in?
“XG Ventures is focused primarily on the consumer internet, including the mobile, video, gaming, social media, and online media sectors.”

How has your background played (or not) a role in your angel investing?
“Absolutely – sales is all about people and so is venture financing.”

One piece of advice to an angel-in-training?
“Invest in what you know.”

One piece of advice to entrepreneurs looking for capital?
“Pitch me a clear problem, solution statement and know your audience and customer.”

What are some investment dealbreakers?
“Rolling close and party rounds.”

Andrea has been named one of the top 25 tech angels by Businessweek. In addition, she has been named one of “25 Influential Business Women in San Francisco/Silicon Valley You Should Follow on Twitter 2010”. She has also been profiled in the 2009 Top 40 Under 40 in the Silicon Valley/San Jose Business Journal and most recently in San Francisco Magazine.

Andrea was also a live judge at the PITCH SF 2013 Startup Competition final round, as presented at the Women 2.0 Conference 2013 last month.

Women 2.0 readers: Are you a Xoogler investing in women-led startups? Let us know in the comments below.

This Is What An Angel Investor Looks Like – Karen Linder 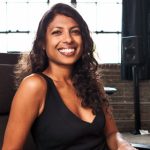 This Is What An Angel Investor Looks Like – Prerna Gupta

Investing in Israel: The Story Behind Crowdfunding Platform iAngels