Today, I am the co-founder of an enterprise software startup, SocialPandas, backed by a top-tier investor with an amazing support system of angels and advisors. This part of my story, which I rarely share, is about the distance I’ve traveled to get here.

At birth, my parents were still in high school. I lived in a trailer in a town with a current per capita income of $18,112, 6.8% of families living below the poverty line, and a crime rate 23% higher than the rest of the state. At my high school, 77% of the student body is economically disadvantaged and 81% are minorities with a graduation rate of only 55%. Seeing my “support” system, you can imagine the relentless determination, drive and sacrifice it took to earn my bachelors degree – two, in fact. After college, I knew I didn’t want to go to law school and I wanted to move to San Francisco. I’d done everything I was ever told to become a success, but without law school, I was exactly who I’d sacrificed my entire adolescence not to be – an overly-educated cocktail waitress.

I arrived in San Francisco disenchanted, leaned back for the first time in my life and wandered. In 1998, I arrived as an office temp at a “dotcom,” a 3-bedroom flat stuffed with 14 people. I was anything but impressed, but it became one of the most pivotal experiences of my life. In the early days, it was a fast, meteoric rise. I was given opportunities it would have taken years to earn in a different economic climate. The CEO was fond of telling me, “I give you something you say you don’t know how to do. Two days later you know more about it than I do.” They believed in me and I leaned in hard to rise to that level of responsibility.

But what goes up must come down, and on August 15, 2000, we laid off 75% of our staff with no notice. For a time, it was just a co-founder and I clearing carnage while trying to keep a small, wounded crew marching forward to rebuild. The years that followed were the darkest in my career. I wouldn’t want to relive them, but I wouldn’t trade them either. I learned more in those 6 years than most learn in 20.

In early 2006, startups emerged into the light of the newly christened Web 2.0. I worked for two such companies under extraordinary CEOs who couldn’t be more different. One startup flourished, the other struggled. I studied scrupulously. You learn in success, but failure demands answers that force a meticulous, repeated evaluation of every painstaking detail. And therein lies wisdom.

Here are 5 things I would tell my younger self:

If someone asks for your time, give what you can as often as you can. And be grateful to those who do the same for you. Never burn bridges. The Valley is smaller than you realize and your network is your most valuable asset.

#2 – Indifference is a powerful response

Being angry or annoyed gives away energy that can be used to build something positive. It’s not easy, but strive for it daily.

I wear heels, cute clothes and care deeply about company culture. I also curse like a truck driver and will crush you in negotiation if you don’t play nice.

The advantages to being a woman in tech are rarely mentioned. When you walk on stage or into the boardroom, you’ve immediately got everyone’s attention. Not because you’re female, because you’re different. Use it. A chicken suit would have a similar effect, but I don’t recommend it.

#5 – Use humor to your advantage

People do thoughtless, inappropriate and perhaps downright disrespectful things all the time. If you’re afraid to speak up for fear of being “that woman,” try turning the tables by calling out the action with a joke. You can often make your point without creating an adversarial or awkward situation.

So with successes, failures and hopefully some wisdom, I’ve now founded my own company. The choice to live off my savings with a mortgage in San Francisco until my company got funded may seem like the riskiest lean in yet. But, in fact, it was the easiest. With the distance travelled to earn my seat at this table, I’m flooring that gas pedal to see just how far I can go.

About the guest blogger: Gretchen DeKnikker is a Co-Founder and CMO at SocialPandas, an alpha-stage social selling solution. She has over a decade of experience launching and growing enterprise SaaS startups and platforms. Most recently, she launched LivePerson’s (LPSN) open platform. She was an early employee at Genius.com and EchoSign (acquired by Adobe). Gretchen loves bacon, bourbon, hip hop, and all things tech. She holds an MBA from UC Berkeley. Follow her on Twitter at @gretchende. 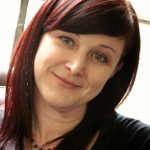 This Is What An Angel Investor Looks Like – Jenny Cheng