Conference speaker and Shapeways co-founder Marleen Vogelaar talks about how 3D printing is putting the soul back into manufacturing.

Marleen Vogelaar may not have been the first to hear about 3D printing, but she was a pretty fast convert.

“Pete Weijmarshausen, the CEO of Shapeways and my co-founder, called me out of the blue and said, ‘Marleen, have you heard of this thing called 3D printing?’” she recalled for Women 2.0. “I said no. I was the one who actually had a manufacturing background and I didn’t know about it, so I starting Googling and was, like, ‘wow, this is amazing!'”

That phone call was six years ago. Today Vogelaar is the Chief Strategy Officer of Shapeways, the fast-growing 3D printing company that’s caught the eye of some pretty high profile VCs and journalists. She is also a speaker at our upcoming Women 2.0 conference (discounts available here).

What got her so excited?

Bridging the Gap Between Artisanal and Manufactured

In short, the technology’s ability to inject soul back into the objects that fill our lives — without making them unaffordable. “Before the industrial revolution, everything was custom built. The great thing about it was you got exactly what you wanted, but the disadvantage was scale. Everyone now has phones and laptops and cars. The only drawback is many of the products have lost their meaning,” she explains.

But 3D printing is set to change all that: “Everybody has a need to feel unique. Everybody has a need to feel that they matter, and it’s hard to express yourself if everybody wears the same thing, looks the same way, drives the same car, etc. People have a real need to stand out — that’s why they personalize things, put stickers on their laptops, dye their hair green. What 3D printing does is offer a large scale, a low price and personalization.”

That’s good news for consumers looking to stand out in a crowd. But it’s also good news for the US economy, Vogelaar says. “I think it’s a huge opportunity for the US. There are many advantages of producing locally so you can immediately and flexibly adapt to local customer needs. Logistics, shipping all of that, speak for producing locally, and so there are many opportunities for American manufacturing to start doing that in house instead of outsourcing to God knows where. 3D printing can bring lot of jobs back to the USA.”

How quickly we can expect to see these changes depends in part on the consumer and in part on the companies like Shapeways behind the technology. “We basically see a future where a significant part of everything you use and have around you will be personally produced for you, so that products will be more meaningful to you. How fast it will be there for everybody depends on growing awareness and, of course, also how fast Shapeways can move the needle in getting [consumers] really beautiful, high-end, quality products.”

Want to hear more of Vogelaar’s thinking about the unfolding story of 3D printing technology? Join us at our Las Vegas conference for her fireside chat.

When do you think 3D printing will do mainstream? 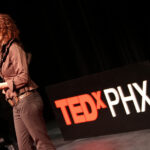