“When you find your passion, you’re unstoppable.”

If Tony Hsieh is working on making people adjacent in downtown Las Vegas, the next speaker on the Women 2.0 stage is concerned with the the concept on a much broader scale (though as she grew up in Buffalo, a rust belt city undergoing a revitalization, she has a special appreciation for Tony’s work).

Smith shared that she was a science fair kid when she was at school. But at current Google Science Fairs, she said, the level of the projects is impressively high. Why? Because the kids are networked. Because they have access to others and information. Linking people together, making them adjacent, helps amazing things happen.

Only 30% of the world has metadata, for example. Lahore, Pakistan used to be one of those places, but working together the residents of the city drew their own map. Khan Academy is another example of people becoming adjacent, becoming available and making incredible things happen.

This process is only set to continue, Smith said, as the three billion people who are unconnected join us in global innovation. Think those living cut off from the network are too far behind to catch up anytime soon? Smith shared the story of illiterate kids in Ethiopia who, when given only a tablet, taught themselves to read over the course of a year. She also shared Google[x]’s Project Loon to float balloons into the stratosphere and provide 3G access to places in the world that currently lack it.

Openness and networks are transforming humanity, but they’re also helping to advance women’s rights and participation. The first women’s rights convention occurred on the Erie Canal because it was a conduit for connecting people, for instance, she noted.

“This year feels like the beginning of the third wave,” of feminism, she said, citing Sheryl Sandburg’s book and the conversation surrounding it, as well as Makers.com. But there are still plenty of problems in the tech industry, including the astonishing fact that 71% of computer science teachers believe that boys are intrinsically better at tech than girls (contrary to all studies, of course). The lost history of amazing female technologists like Grace Hopper, NASA’s Katherine Johnson and Ada Lovelace is another hurdle to overcome.

“We have a lot of work to do on the visibility historically,” she said. Hollywood and television could do a better job of providing role models, she added, noting that Google is working on the problem, as well as speaker training and bias training.

She also talked about the “moonshots” that Google[x] is at work on, including Google Glass, self-driving cars, Makani Power, which makes kite-based windmills, and Solve for X, a place for people to post their own moonshots. She asked the audience to guess how long the first prototype of Google Glass took? The answer will surprise you. It’s 1.5 hours.

Smith ended with this question: 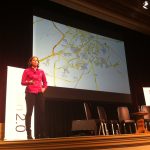 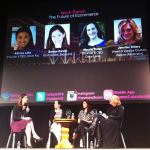 E-commerce Is a Two-Headed Thing

The Future According to Megan Smith