Mentorship is hugely valuable when you’re starting out, but one founder discovered it’s equally rewarding to be a mentor later in your career.

One of the first things I tell women looking to make their way into entrepreneurship is to go out and find a strong female mentor. This task can be frustrating, as the pool of women to choose from is narrow. But that’s why it’s critical not only to find your own mentor, but also to then turn around once you’ve had some success and become a mentor yourself. We need to ‘pay-it-forward’ so that we can expand the pool of women in leadership roles.

I learned the value of having a mentor three years ago, when I met the woman who would soon become mine: Karen Friedrich. Karen had been an early employee of CareFx, which was acquired by Harris Corporation for upwards of $150m, and a friend introduced us because I was also in the healthcare technology space. At the time, I was only a few months into ZappRx, a company of one operating from my kitchen table, with less than $100 in my bank account.

Upon meeting, Karen immediately jumped in and took the time to help me map out my go-to-market strategy, both on the federal and commercial side. She opened her rolodex, making important introductions in the healthcare space, and taught me about navigating customers, contract decisions, and a host of other valuable insights. Karen went out of her way to help me, despite how green I must have seemed at the time, and her belief in me gave me considerable confidence to continue on when things got difficult.

Since the days of operating from my kitchen table, I’ve raised over $2M in venture capital from blue chip investors, attracted incredible talent to my team, and am in the final stages of contract negotiations with some of the largest players in the healthcare space.

The truth is, Karen chose me as much as I chose her, and it was through her selfless guidance that I was later inspired to mentor other women entrepreneurs: “Make sure you find the next generation of women founders,” she said to me on several occasions, “and groom them. Otherwise there will be no one.”

A little while after Karen began helping me, a then 17-year-old named Olenka Polak reached out to me asking for guidance on an idea she had for an app, which would later become myLINGO. A strong part of why I was so eager and willing to help Olenka was because Karen had been so eager and willing to help me. I realized then that even though I was a first-time founder still relatively early in the game, the fact was I had gotten an investor term sheet, I knew how to file a patent, and I’d built out the first stages of my technology. I had something to offer someone else whose company was still a figment of their imagination.

I spoke to Olenka on the phone, and it was very clear that she had that mysterious and elusive “it” factor — that thing that is hard to quantify, but when you experience it, it’s like being zapped. I knew Olenka was someone who would blow through any obstacle, someone I could bet on to defy all odds and be successful building a startup into a company. I coached Olenka through the very first steps of filing a patent, outsourcing technology until you could bring it in-house, and getting incorporated. What took me 11 months, Olenka did in five. I trailblazed because of Karen, and then Olenka accelerated off of my model.

Olenka was recently voted one of Forbes’ 30 Under 30, and has been featured everywhere from Fast Company to Variety. Watching her success makes me proud to be part of a string of women helping other women, and I hope Olenka will do the same for someone else someday.

As an entrepreneur at any stage, it’s important to find mentors with expertise in areas where you need help. It’s then your duty to seek out women beneath you and pull them up alongside you. We are the link to the next generation of strong and independent female entrepreneurs. I have only gotten where I am today because so many people – both men and women – have opened doors to me, sat down with me, and taken the time to give me real advice. Of those, I am especially grateful to Karen, not just because of the entrepreneurial wisdom she gave me, which was invaluable, but also because she transmitted to me a passion for mentoring others.

Have you benefited from mentorship? Are you paying-it-forward?

Zoe Barry is the Founder and CEO of ZappRx. Formerly of AthenaHealth, a Fellow in the Boston Startup Leadership Program. Zoe began her career at hedge fund Dawson Capital in New York. She graduated with a B.A. in Anthropology from Columbia University in 2007 and currently mentors undergraduates in the Columbia College Women in Business Society. 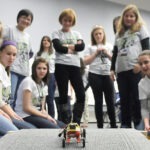 Secrets Shared: 2 Female Founders on Best Practices to Snare Funding for Your Startup

Do You Have These 4 Kinds of Business Mentors?