Dear Founders: Children Are Not a Distraction, They Are Motivation

A busy CTO with four kids responds to those who feel he could be more successful without his family.

A couple of months ago we had a discussion on #startups when a topic of having children spun up and I revealed I have four.Immediately one of the more prominent HN members pointed out that I’m somehow at a disatvantage since there’s a version of me out there without being burdened by having to support a family and thus has a bigger chance of success.What a load of crap. Let’s imagine for a moment that there really is a version of a single, family-less me out there. Would he really be more successful? I’m sloppy, so he would be sloppy as well. I have a short attention span, find it hard to avoid chasing whatever is new in tech and all around easily distractable (working on it though). So this imaginary person would have all these characteristics as well, right? And where would he be? Partying, drinking, having fun, business being the last of his worries.I know this because I used to be that person, until I met my wife who showed me there’s more to life than getting drunk every weekend.

Okay, okay, I know what you’re thinking now, what if that person had none of those deficiencies? He would be working hard, too hard in fact, inevitabely burning out. Been there, done that too.

Then I Had Kids

For the first time in my life, I was responsible for another human being (two in fact – I got twins). I didn’t realize it at first, but this completely changed my perception about startups and entrepreneurship in general.

The time of experimentation was over. If I was gonna do it, I needed my startup to succeed. My kids’ well-being depended on it, after all. So I needed it to bring money in from day one (Codeable actually earned our first dollar on day three, which is still okay).

When I asked my client at the time, now my partner in crime, Per, to join me on this great journey I already knew he felt the same — he too has kids of his own and rent to pay. Plus he has a great bullshit detector, which my idea passed 🙂

Yes, they do. And that’s good. That means I can’t just stay at the office every day, all day – I have to go home, spend some time with them, read them a fairytale and do my best to not only provide materialistic stuff, but be there for them as a father too. If there’s a perfect way to prevent burnout, this comes pretty close! (Do not, however think that I’m not tired. I am, and while similar at first glance, burnout happens and manifests itself for other reasons and in different ways)

It’s All About Logistics

I’m not going to lie, it can be difficult at times, especially when I need to travel – knowing that my wife will need to take care of everything in my absence (Kudos to her for that, I’m speechless sometimes). And for some reason, unknown to me, they all get sick when I’m gone.

But at the end of the day, all it takes is a bit of planning ahead, and everything’s perfectly doable. Where there’s a will, there’s a way!

I know plenty of people who say they want to have kids, but the time is just not right yet – career comes first. But in my opinion, the two don’t exclude each other. You can be successful parent and a successful entrepreneur at the same time. Because you know your biggest motivativation is waiting at home for you to hug and read a fairy tale to. I know I will.

About the blogger: Tomaž Zaman is founder and CTO, Head of Product Development at Codeable. He spent years as a freelancer, building websites and applications for clients all over the world. He’s a completely self-taught developer who also likes to fiddle with servers. At Codeable, he’s responsible for product development and promotion. 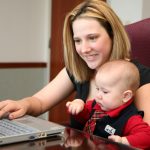 5 Ways Parenthood Prepares You to Be CEO

5 Advantages of Startups for Working Moms