The Key to Trampling Gender Stereotypes and Owning Your Femininity

How to show the world — and the board room — you’re not a stereotype.

The list of stereotypes women face in the business world is long and frustrating — if not outright infuriating. Women have spent decades trying to be taken seriously by people in power (mostly by acting more like men). We’ve dressed older and more traditionally, followed football to keep up with banter and made sure we’re noticed for our brains and abilities rather than our looks.

While there’s still a big gap between men’s and women’s wages, our female predecessors have made huge strides toward achieving professional equality. This has brought us to a new era where we can have a massive impact on the world while honoring our feminine power.

At a conference, you’re meeting people for the first time — many who may have preconceived notions about female entrepreneurs. Make the most of this opportunity to demonstrate immediately that you are not a stereotype. Here are several ways to confidently establish who you are:

How I Changed My Mindset

It isn’t easy to ignore criticism or stand up for your beliefs when you’re the minority. Authenticity takes courage, but it always makes you more powerful.

I used to show up to meetings at 24 years old in a very traditional suit and my ready-to-work face on. I was trying a little too hard. And it was likely that people could tell.

Once, I showed up to a boardroom full of men and decided to wear a bright pink top and my favorite heels. In this meeting, there came a point when I disagreed strongly with my competitor’s intimidating corporate legal counsel.

Previously, I would have probably tried to pull out all the facts, argued, and tried harder to prove my point. And I would likely have ended up feeling defeated. But this time, I confidently “stood my sacred ground.”

I was able to operate from my more feminine qualities of cooperation, communication and sharing to leverage my true power (see John Gerzema and Michael D’Antonio’s book, “The Athena Doctrine.”) I sensed a shift in my body. I relaxed, breathed deeper, lowered my voice, and spoke naturally. I expressed the truth of what I knew, without needing to have all the answers.

In the next few moments, I felt something magical happen. Suddenly, everyone was listening. I knew I had gained instant credibility. People’s minds started to open up to new possibilities, which was exactly what we needed.

It is possible (and much more desirable) to own our femininity and power while having an impact on the world. We don’t have to be more like men; we just have to understand how to use our unique qualities to contribute to the conversation.

Do you agree that embracing your femininity is an authentic way to trample stereotypes? 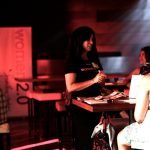 7 Reasons Why It’s Better to Be a Female Founder 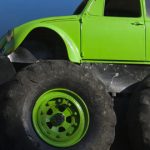 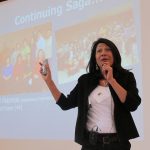