This story first appeared on Inc.com.

When Debbie Sterling’s high school math teacher suggested she consider engineering as her college major, she balked, after briefly envisioning herself driving a freight train. Such was her level of cluelessness about the profession. But curiosity led Sterling to an introductory mechanical engineering class at Stanford, and she got hooked.

“I realized that engineering is a skill set you use to build anything you can dream,” she says. Now, it’s her mission to make sure that the next generation of girls dreams big and gets as jazzed up about engineering as they do about playing princess. It’s an admirable goal; currently, only 14 percent of engineers are women.

Sterling’s company, GoldieBlox, makes a construction toy marketed to girls. The idea first surfaced at an “Idea Brunch” gathering with friends in San Francisco two years ago. “Each month, someone would pitch an idea for a company,” she recalls. “One of my friends pitched a construction toy for girls, and I became obsessed.” The two worked on the idea together initially, but it was Sterling who was committed enough to quit her job as marketing director for a jewelry company and devote herself full time to the venture.

Her research revealed some key differences in the way that boys and girls play and learn. Boys want to compete mano a mano and girls like cooperative play; girls love stories and characters and gain confidence through reading. Dismiss these differences as stereotypes if you like, but Sterling embraced them and let them inform her product design.

For instance, every construction toy comes with a storybook whose main character, Goldie, must solve a problem, the solution to which involves building something, such as a dunk tank or a spinning machine. “Instead of just building for the sake of building, we’re telling girls who they’re helping and why,” says Sterling. Storytelling, she says, is exactly how American Girl dolls gave Barbie a run for her money. But when Sterling built a prototype and took it to the New York Toy Fair, “they all looked at me with pity and told me that construction toys for girls don’t sell,” she says.

A Kickstarter campaign proved otherwise. Sterling exceeded her $150,000 goal in four days and ended up earning more than $285,000 for an initial production run in October 2012. The campaign generated so much publicity that parents were demanding the (as yet nonexistent) product at toy stores.

GoldieBlox now has three main products, carried by more than 1,100 retailers in the U.S. and Canada. The products also just launched in the U.K., Australia, and South Africa.

Along the way, Sterling attracted the attention of Maxine Clark, the founder of Build-A-Bear Workshop, who read about GoldieBlox and immediately contacted Sterling offering her assistance. “She contacted me in about 15 minutes,” says Clark, who advised Sterling for a year and then invested in the company. “Retail, consumer, and education is my wheelhouse.” Clark has advised Sterling on factories and distribution channels, among a number of other things. “The biggest challenge now is keeping up with demand as the product develops into a lifestyle brand,” says Clark. “They finish with one and they want the next. I can help her with that.”

The growing demand has further fueled a good bit of publicity. First, there was a legal battle last year with the Beastie Boys over a GoldieBlox promotional video that featured a parody of the band’s song “Girls.” That was settled recently and is now “water under the bridge,” says Sterling. On a more positive note, the company beat more than 15,000 other small businesses to win Intuit’s Small Business Big Game competition and landed an ad on Super Bowl XLVIII. Touchdown.

On deck for GoldieBlox: three new products that will launch in the fall, and at least one will feature a boy character and more gender-neutral color palettes. “We’ve been getting a lot of feedback that boys love GoldieBlox,” says Sterling.

Check out more at Inc.com: 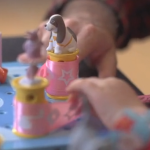 3 Steps to Transform Your Passion Into Product

Could Women Be The New Me-Commerce Tipping Point?