What can an entrepreneur learn from the special ops and intelligence community? Four essential lessons about empowering employees, according to one co-founder.

Natalie Lehr is the cofounder and director of analytics at TSC Advantage, an enterprise security company based in Washington, D.C. But before starting TSC, Natalie amassed a wealth of experience working with the U.S. government to identify and acquire information to support national security.

It turns out that many of the lessons she learned can help entrepreneurs empower their staff. She shares four key strategies with us.

“In the special ops and intelligence communities, there is a saying: ‘Get off the X’,” she tells Women 2.0, “which means get out of the kill zone, point of attack, minefield, sniper crosshairs or other danger zone.”

Fifteen years of experience with both the government and in the commercial security industry has taught her that doing nothing has consequences. In combat, if don’t move, you risk your life.

Though lives aren’t at stake in most businesses, livelihoods are. Stolen corporate trade secrets costs U.S. companies about $480 billion each year. These days any company is a potential target for a cyberattack as the use of mobile devices grows and the cloud is the place of choice to warehouse their sensitive data.

Combat against advanced and sophisticated threats has resulted in a cyber security market that is estimated to grow from $95.60 billion in 2014 to $155.74 billion by 2019, according to MarketsandMarkets, a global market research and consulting company.

As the organization tasked with protecting and preserving information, it’s important for TSC to function proactively to avoid threats rather than have to rebuild after a data breach. That’s why Lehr says, “I want each of my team members to feel he or she has the power to make critical decisions – regardless of job title.”

So far, Lehr’s tactic is helping TSC Advantage grab a piece of that market share.

Since its launch in 2007, TSC has grown to 47 employees, with an average of 10 added annually. Revenue has grown 650 percent since 2010 as the company serves customers from startups U.S. higher education; Fortune 300 manufacturing; oil and gas; U.S. critical infrastructure and Fortune 500 high tech firms.

As the cyber security industry has seen, one click can cut a company off at the knees, destroying consumer trust and exposing sensitive data to hackers. Adobe, eBay and Target are among the organizations that have been affected in the last year.

That’s why Lehr says she’s looking for people who don’t wait to be handed marching orders when she’s recruiting candidates. “We look for strong, talented employees who have leadership vision and require minimal supervision,” she says.

When you’re responsible for protecting other organizations’ intellectual property and trade secrets, Lehr notes that things don’t always go as planned. “It’s key that every hire understands that,” she says, “We look for potential employees who can assess situations, make adjustments quickly and understand that there is no risk-free experience.”

3. Instill Values Before Day One on the Job

Lehr says this starts during the initial interview, when candidates are asked to describe their problem-solving perspectives. “For example,” she explains, “We ask whether they prefer tackling unresolved challenges or have a deep expertise on a particular matter.”

The best candidates will have a blend of both skills, she says, because solving sophisticated challenges requires subject matter expertise and creativity.

It’s also important that prospective employees express they can be comfortable with delayed gratification, Lehr points out. “Not everyone can remain emotionally satisfied supporting strategic programs where the outcome aren’t immediate or obvious,” she explains, “Especially in security matters, patience and grit have a stronger impact on success than following any checklist.”

It’s one thing for a candidate to say the right stuff in an interview, but for TSC Advantage  – and its customers – to thrive, its staff needs to be proactive on a daily basis. Lehr says the company cultivates this two ways. One is to reward with traditional financial bonuses and promotions; the other is warmer and fuzzier than a check or a title change.

“Every quarter we recognize outstanding employees with the ‘Get off the X’ award,” says Lehr. Besides receiving a trophy and company-wide recognition, Lehr says the awards encourage team members to support a philosophy of being proactive that is at the core of the company.

How have you helped empower other people? 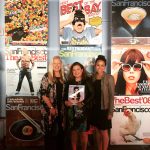 How Motherhood Turned Me Into an Entrepreneur

Studies Show Women Are Better Entrepreneurs, Board Members and Managers

How One Founder is Championing Women of Color in Tech