Uncomfortable Being the Boss? 5 Tips That Will Help

Being the top decision-maker doesn’t always feel right. Here’s how to make it better and become a more confident boss.

This story originally appeared on Inc.com

It took me a decade to get here. I joined the board of the American Society of Journalists and Authors in 2002, and took over as president in 2012.

That’s unusual. Most people join the board and leave after a few years, or else they go from board member to president a little more quickly. But I enjoyed being on the board, and while I knew I was working my way toward being president, I wasn’t in any hurry.

Instead, I learned something about myself I’m not proud of: I don’t love being the boss. Being a boss is just fine with me. Being the boss, not so much. I like persuading rather than commanding, and leading by influence rather than by fiat. But those consensus-building skills that served me so well as a board member sometimes got in my way while I was president.

ASJA is a large organization with many different constituents, programs, and priorities, so being president has a pretty steep learning curve. While I like being a laid-back leader, during my two years as president I had to be something else some of the time. Here’s some of what I learned along the way.

If the buck stops at your desk, acting like you’re the same as everyone else won’t work. It’s a bit like parents who try to function as their children’s friends, rather than as authority figures. It may be more fun in the short run, but will likely lead to bad results in the long run.

There are a very few exceptions – one is Morning Star, the tomato processor that has rigorously maintained a non-hierarchical structure since the 1970s. But that takes a lot of forethought, planning, and careful hiring of like-minded individuals. And even so, the company’s non-CEO founder must occasionally serve as decider of last resort when employees are unable to resolve their conflicts.

Around ASJA, I was sometimes referred to as the “Queen of Diplomacy” because I was on good terms with everyone and had a knack for resolving conflicts so that everyone was happy. I was also good at delivering unpleasant news in the gentlest possible way. But even before becoming president, I learned that there’s an essential difference between being diplomatic and putting off tough conversations.

It can be stressful and unpleasant, but if you don’t address conflicts head on, they will come back to bite you. And if you avoid telling people things they don’t want to hear, you’ll wind up with a dysfunctional organization and unhappy employees.

This was an error I sometimes made early on, until a couple of colleagues gently pointed it out to me. When issues had no immediate deadline and ASJA leaders couldn’t agree, I would sometimes kick things down the road almost indefinitely, so that we could continue discussing and – I hoped – eventually all agree. I thought I was being inclusive, but in fact I was driving people crazy.

It’s great to get opinions from your colleagues, but when those opinions conflict with each other – or with your own best judgment – you have to choose what you believe is right. I learned to listen to everyone’s opinions, then make a decision and explain my reasons. To my surprise, those who disagreed would sometimes thank me for treating them with honesty and respect.

4. Make Sure to Set the Agenda

Even when you’re seeking opinions from your colleagues, as leader it’s up to you to structure the parameters of the discussion and determine what problem you want to solve. Even more important, it’s your job to provide the context for that decision-making process. Are we looking for a quick fix because we’re in trouble? Exploring a new opportunity where due diligence is required? Batting around wild ideas about possible new directions?

You may think of your colleagues as completely independent thinkers, as indeed they are. But they are still looking for you to let them know what the significance of a decision is, in both overt and subtle ways.

5. Don’t Hesitate to Ask for Help

Because you’re the boss, it’s up to you to make the final decisions. But that doesn’t mean you have to have all the answers. If you have to make a tough decision and you aren’t sure what to do, it’s OK to say so, at least for a while. Don’t let your fear of appearing weak prevent you from asking the question I’ve asked when confronted with a difficult situation: “What would you do if you were in my place?”

The answers have always taken me in unexpected directions. They’ve made me look at difficult situations from an entirely new perspective. And they’ve always helped me arrive at the right choice.

Check out more from Inc.com:

The Best Way to be More Confident 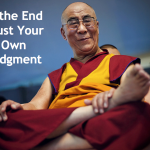 How to Make Sense of Conflicting Startup Advice

#TechTuesday: Why I Left a Big Tech Company for a Small Startup