This message comes to you after weeks (months) of thought on the upcoming election, and how much of a role Women 2.0 should play in the conversation.

Prior to this election, I’ve been almost entirely mum about straight political issues in public — in writing, on social, on the job… For the most part. I’ve stuck to focusing on the issues, and have consciously chosen to remain neutral politically, having my conversations in closed quarters with friends and family.

I’ve also — purposefully — run prior organizations and companies from the standpoint of political neutrality as a brand, as a high level of inclusivity has always been top priority. There’s been little reason to introduce controversial factors that have the potential to alienate audience members in an area that isn’t our focus.

I’m someone who’s voted a lot of different ways, and consider myself middle-of-the-road: liberal on a lot, conservative on some, open-minded to look across party-lines, and a general lover of humanity.

In terms of gender, this issue is at the center of this election in many ways, and it’s hitting the core of what Women 2.0 stands for.

First, and most obvious, we have the potential for our first woman president — a thought that makes me weak at the knees whether she be a Democrat or a Republican. As for Clinton herself, I have been endlessly impressed with her work for women and girls around the country and the world (and I’ve seen it first hand), and her strength, knowledge and stamina (yes) in all the positions she’s held. She’s someone who’s showed the capabilities and confidence in office that exemplify leadership. We feel she as a person is equipped to lead this country.

It’s worth noting that both Shaherose and I were among the 80+ influencers that signed the #WhatWeNeedToSucceed initiative in partnership with Dell, bringing forward to whoever takes the seat at the White House a set of suggestions that will help cultivate women-founded businesses and support them in their quest for greater success.

It almost goes without saying that we feel Clinton is significantly more capable and willing to bring this and other related sets of suggestions to fruition.

From our COO, Elisa Miller-Out:

“It’s about time! I’m thrilled at the possibility that we may soon be electing Hillary Clinton as our first woman president. It’s been quite a long road, from women getting the right to vote in 1920 to being about to elect a woman as the most powerful leader on the world stage. That we’ve come this far marks an incredible achievement for our movement and we should celebrate it as we continue to work hard to close the significant gender gap that still exists in Technology and Entrepreneurship.”

But, for us (all of us), it’s more complicated than this.

We also have a presidential candidate — Trump — who has directly opposed the very qualities our organization and community have been working to improve for the decade of our existence.

Trump champions sexism, racism, discrimination, sexual assault… you name it. He wouldn’t flinch at telling the majority of our community that they have no more worth than a breathing female body (and, for him, that self worth is dependent on what type of body you have). He certainly wouldn’t tell you that you should be starting companies, running corporations, or getting paid as much as your male counterparts.

The exact things that we stand for.

Should he take the seat, the progress we’ve fought for over the last several centuries in this country hangs in the lurch. Gender equality could very potentially take a step — or steps — backwards. Sure, #RepealThe19th didn’t come from Donald Trump….but it did.

Looking more broadly, Trump has proven to be divisive across all lines.

Shaherose, the original Co-Founder of Women 2.0, share her thoughts on the election as she looks back on the work she’s done for this community in the past decade:

“This election is not a fight for democracy, its a fight for decency. How can the potential leader of the most admired country in the world speak with such indecency?

In parallel, this election is not just a fight against discrimination, it’s also a fight for innovation.”

One of the overwhelming thoughts I have is of my children, as Shaherose alludes to.

A few years ago I flipped through an old class pamphlet from when I was in elementary school. It was all of my classmates declaring what they wanted to be when they grew up (mine was veterinarian, that turned out well). Nearly half of them stated that they wanted to be president, and I assume this is a similar breakdown with today’s children in the US.

Well, I have two sons — a two and half year old (Cooper) and a seven month old (Brody). The thought of them looking up to someone who has depicted woman — people — in the way that Trump has or holds the same outlook on humanity that Trump does makes me sick. Truly, utterly sick.

We simply can’t endorse this, and we also can’t sit in the middle, complacent.

It’s no longer about politics, it’s about morals and values. There reaches a point at which we simply must stand up and say yes or no. In this case, it’s both.

Should you wish to share this and declare your own support (and we hope you do), please use the hashtag #Women2forClinton.

We understand that in making a public statement of this nature, we risk backlash and the potential loss of some of our community members. For that, we are truly sorry, as that is absolutely not our intention. But we have the opportunity to take a stand both for and against what lies at the core of our very value system, and it’s an opportunity we simply must take. It’s our responsibility to do so.

Thank you, and let’s look forward to a world that’s better for us all in one week’s time. 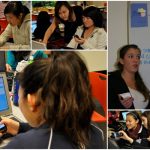 3 Questions to Ask Yourself to Decide if You're Expert Enough

5 Ways to Prevent Perfectionism from Holding You Back 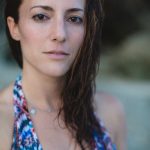 This is What an Angel Looks Like: Hillary Legrain
Judith Martinez