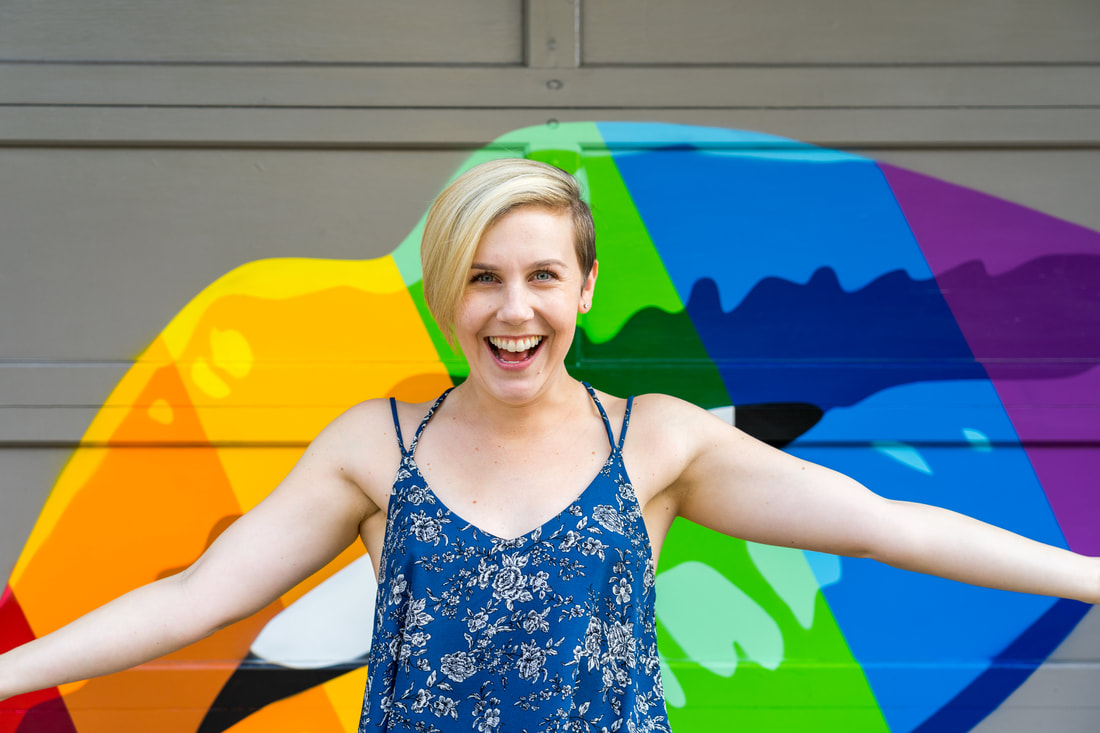 Purpose And Profit: How This Founder Beat Addiction To Build A Business That Makes A Difference

Four years ago, Kelsey Witherow woke up in a Barcelona hotel room without any idea how she got there. On the floor, an empty bottle of red wine refracted shards of harsh yellow sunlight. A thatch of damaged clothes sat crumpled in a corner. Confused, she sat up in bed, unlocked her phone. She discovered her boyfriend had dumped her the night before. Coworkers were asking if she was alright. One bemoaned her wasted potential.

Slowly, Kelsey felt her heart crawl up her throat. Her head pulsed with dread.

“I knew I was capable of more,” she told me over Skype, reflecting on the moment. “I knew I had more to give to the world. And I knew I never wanted to feel like that again.”

She flew back home later that day and set out on a road to sobriety––and also, perhaps, to reinvigoration. She’d been working for years as a product marketing engineer at Intel. She was 24 and making six figures, but she was also an alcoholic who’d become complacent and had taken to coasting on natural talent. Since turning 18, she’d been arrested, hospitalized, and alienated from loved ones.

“It was really hard,” she said, “To admit that I had a problem.”

Today, she’s the founder and CEO of Doughp––a mission-driven dessert company born from a lifelong passion for baking. (Think Cold Stone meets cookie dough meets cocktail bar.) The company just opened its third physical location––this time in Las Vegas, Nevada. Each member of Kelsey’s staff is or will soon be mental-health certified. Every six months, she concocts a new “Doughp4Hope Remix” flavor––this month, she partnered with Las Vegas’ Chippendales to create “Chipp-tastic,” an unusual blend of cookie dough, potato chips, chocolate chips, and peanut butter cups––and sends 100% of the proceeds to a different nonprofit. This month, it’s the American Foundation for Suicide Prevention.

Most startups fail before the end of their first year, never making money. Many entrepreneurs buckle under the stress of the effort and quit, or succumb to their own bad habits. Doughp, on the other hand, has been profitable for nearly 18 months. And Kelsey, meanwhile, has not had a sip of alcohol since she stepped out of that hotel room in Barcelona.

It’s a story I find fascinating. I, too, have grappled with a certain insistent propensity for self destruction, and I’ve thought hard about what it takes to defeat it.

I’ve also counseled others on the subject. In a former life, I was a school teacher. Once a student of mine asked me how she could become a CEO when she grew up. I believe I told her some version of, “Think of a problem to solve, go to college, and work really hard to make your solution really great.”

Kelsey’s story reflects the timeless relevance of that boilerplate advice. But in an age of Theranos, the Fyre Festival, and Facebook, especially, it also compels an important addendum: in an age of deceit, to be great, you have to be authentic––both in your belief in your product, your commitment to self-improvement, and your desire to better the world.

How to pick yourself up

A quick disclaimer: I’ve known Kelsey since college. We met at a philanthropy event our sophomore year. Right away I found her charming, intelligent, energetic. We became friends in the frictionless way of satellites and space objects, passing each other amicably in orbit. We lost touch after graduation.

That was back in 2012. Two months ago, I saw her on the news. I sent her a Facebook message congratulating her success and asked if we could find a time to chat. I told her I was interested in writing a story about her company; I was doing a series on millennial founders. We spoke for about an hour over Skype the next day.

On the call, which she took from her new apartment in Vegas, Kelsey told me about the morning she woke in Barcelona. Then she detailed how when she got back to Oregon the next day, she set about putting her life back together. The first thing she did was enroll in AA, find a sponsor. Then she went back to her roots, the pursuits and means of leisure that brought her solace, peace.

That meant baking, which she’d always loved. Each night, after she got home from work, she occupied her time and her newly-sober mind making truffles and cakes, brownies and, yes, cookie dough. She baked for her friends and for her coworkers. She recalled it as a kind of kinetic therapy, but it turned out to be of tangible value, too; everyone who tried her treats loved them so much, it became obvious to Kesley that she could try selling them.

Thus began her first foray into entrepreneurism: an online store through which she tried selling her desserts. She ran into in retrospect inevitable complications, though, and shortly thereafter had to shut the business down.

What came out of that short experience, though, was the identification of a kernel of an idea that could eventually work: Kelsey’s early customers loved, in an outsized way, her vegan, eggless cookie dough recipe. In the manner of almost-successful creatives throughout time, she knew she had something––she just wasn’t sure how to harness it.

Six months later, Kelsey was given a chance to move back to San Francisco, where she’d been raised, to help run an Intel-affiliated nonprofit called Hack Harassment. Still sober, she’d get to run it in concert with Lady Gaga’s anti-bullying organization, Born This Way. At a time when millennial unemployment was still unfortunately high, it was something of a dream opportunity.

Kelsey saw it, too, as a chance to reset, or perhaps settle. But working in the nonprofit space proved a new source of inspiration. I believe it instilled in Kelsey an appreciation for the importance and moreover the opportunity of doing good. Culinarily talented, and still entrepreneurial at heart, I believe it was here that Kelsey started thinking seriously about how to couple philanthropy with a means of making money.

Inspiration didn’t truly strike, however, until Kelsey joined a group of friends for a night out in the Mission. Kelsey, assuming her usual role as social shepherd, guided the group from bar to bar and, at the end of the night, suggested getting desert. No one was in the mood, however, for ice cream or for cupcakes. That’s when it hit her. Kelsey steered everyone back to her apartment, where she made globs of cookie dough and served it by the appreciative, drunken bowl-full.

The next day, she made another batch of cookie dough at home and set up a little table in San Francisco’s Delores Park. She of course didn’t have requisite, licensed equipment to make her product at scale, nor a full recipe, nor really even a business plan, but she wanted to see if her idea was real, and so she decided to go for it. She advertised her “Edible Cookie Dough” with a sign taped to the table’s plastic brow.  She had to explain to a few initial customers that her product was not in fact edible marijuana––“Oh sweeeet, edibles!” initial customers exclaimed––but this writer sees it as telling that those folks walked away satisfied anyway.

Apparently, so did Kelsey. The next week, she contacted SPARK Social, a food truck park and event space in San Francisco’s Mission Bay district. The SPARK team added her to the summer lineup that day. Her first afternoon, she sold out her entire batch. Promptly thereafter she invested $3,000 of her own money to rent a commercial kitchen, hired part-time help, and set forth on the founder’s grind––you know, the combination of long hours, isolation, and teeth-grinding grit required of nurturing a flicker of light into a profitable flame.

Before too long, Kelsey’s fire caught. She quit her job for good and branded her company Doughp. She was making money working events and filling catering orders all over the city. The next step, she determined, was to make good on her authentic desire to couple profits with purpose.

It was to this end that she partnered with The Bread Project––a nonprofit kitchen based in Berkeley that provides work-readiness and professional-development programs for marginalized East Bay residents. They helped her with dough production. (Doughp is now The Bread Project’s second biggest partner, behind San Francisco Soup Company.)

Next, she began sharing her story publically. She did press in which she detailed her struggle with alcoholism. In the weeks leading up to the opening of her first brick and mortar location on Market Street––an opening which coincided with Kelsey’s two-year anniversary of sobriety––readers on Doughp’s social media pages were told that if they said, “It’s dope to be sober” at check out, they’d get 20% off their order. Subsequently, Kelsey’s inbox and Doughp’s Facebook page were flooded with messages of support and commiseration, from former addicts to those still struggling to kick drugs or booze.

“It’s the best feeling in the world,” Kelsey told me. “Actually doing the thing you set out to do.”

Now, it should here be noted that Kelsey’s story is not without controversy. In 2017, for example, upon giving her initial menu offerings unique names like, “This S’More is Hella Lit” and “Cold Brew is Bae,” she was accused of cultural appropriation. She apologized, promptly adjusted her perhaps misguided branding, and focused on further strengthening her communal ties.

The appropriation controversy is interesting, though, in that both her response to it and her quick course correction further substantiate her case study. I think of the young girl in my class years ago. I think of the many millennial entrepreneurs I know and write about today. And I can’t help but feel there’s a lesson here. Authenticity and an honest commitment to creating something valuable and good act as a kind of oxygen for the fire you cradle in your palm. It fosters customer loyalty and acts, in a way, as a market differentiator. It can also propel you through mistakes.

It’s one reason, I think, that Kelsey and Doughp have been successful. The company found a niche, yes, but Doughp’s success is also entwined with the fact that its altruistic ambitions are genuine. When it’s all said and done, Doughp very well might leave a lasting, positive imprint on the world.

Or it might not; I’m not an entrepreneur, and I’m definitely something of an idealist. But idealistic or not, if I was an entrepreneur, Kelsey’s is the kind of business I’d want to start: one that makes money, but that also at least seeks to make a difference.

Near the end of our Skype convo, I asked Kelsey if she was proud of what she’d accomplished, given how far she’s come since that hungover morning in Barcelona. She was doing what so many before her had set out to do. She was a millennial example. She was sober.

She thought on it a moment.

“It’s dope,” she said, without a trace of irony.

This piece originally appeared on Minutes Magazine, and has been published here with permission.